The sites proximity to urban areas provides the opportunity for reinforcing natural migration routes into the urban green spaces. Beauvale Brook, running approximately 280 metres away from the sites perimeter, is a key corridor that has been detrimentally affected by industrial development in the Greasley length, and by a general lack of management of the brook bed and banks. Colliers Wood helps overcome the diminished value of the industrialised length of Beauvale Brook by providing a close parallel route, though of a substantially different nature. The brook runs through the Greasley Estate land. This is within the Green Belt and still largely agricultural. Intensity of farming diminishes the environmental value but this area still remains an important route for migration corridors.

Beauvale Brook arises at two locations in the southern magnesian limestone area. Both are to the east of the motorway; reinforcing its importance. The motorway cuts through long established wooded areas whose drainage approximates to a NE>SW direction. The northern source of Beauvale Brook is a wooded area, The Dumbles, (near Kennel Lane), which is to the north of Park Springs wood. Both straddle the motorway. The southern leg rises at Balaklava Wood which is part of Park Forest. The two brooks combine just west of the motorway to then meander along, being joined by several tributaries, to reach the Moorgreen Reservoir complex, then on through brown-field sites and urban development, changing its name to Nether Green Brook at Mansfield Road, and then flowing down to join the Erewash Valley canals within the important Erewash Valley environmental corridor.

The brook flowing directly into Colliers Wood rises at High Park. Its course was modified by spoil levelling when the High Park Colliery site of the Moorgreen Colliery complex was closed. This brook gives access to Morning Springs and the motorway corridor.

To the south east of the site, agricultural fields rising up to the urban ribbon development along Moorgreen are divided by six well established hedgerows. Beyond Moorgreen, agricultural land of mixed cultivated fields, most divided by hedgerows, and a scattering of small copses reach through to Watnall and Giltbrook. This is a further important route via the Gilt Brook stream into the lowland areas adjacent the Erewash River and the two canal corridor that pushes through urban areas to reach the river Trent. An important brown-field site at Bennerley Marsh and the agricultural areas of Babbington, Cossall, Strelley, reaching down to Trowell sit adjacent this river corridor and are surrounded by urban development.

The importance of the water courses within the Erewash Valley catchment is apparent from the Map 8 Water Resources plan that can be viewed by clicking here. 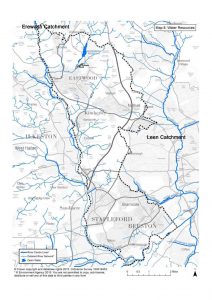 Broxtowe Borough Council’s Green Infrastructure Strategy 2015-2030, draws attention to the benefit that the urban green spaces obtain from migration off these adjacent undeveloped areas. It reviews the existing situation with the Erewash Valley environmental corridor and considers what improvements may be possible. The importance of this corridor is well illustrated. This document additionally recognises what they refer to as ‘secondary green infrastructure corridors’ that run in close proximity with, and even through, Broxtowe’s urban areas. These corridors do not have sufficient width and unbroken continuity to be classified as environmental corridors that would enable migration/spread of most species that are not mobile or do not forage over long distances. Such corridors also suffer from the impacts of resident’s frequent and even substantial use. Several of these green corridors are pertinent to Colliers Wood and its adjacent landscapes.

Click the links below to view the sections of the Green Infrastructure Strategy 2015-2030 that deal with these corridors.