The FoCW realised at an early stage of the sites existence that it would be beneficial for future habitat management to monitor the migration of species into the site. None of the Friends has particular species knowledge and consequently help has been sought from regular visitors who do have particular knowledge. Collation of this information was also recognised as a potential source of material for seasonal handout documents, specific species information sheets and children’s education activities. Eventually the information may be of value to the County Records Office.

Observations are made at monthly intervals with particular emphasis on the spring, summer, and autumn periods. Initially the records were kept in handwritten continuous format. Distribution maps were produced for some species. Subsequently, in August 2004, transferring of accumulated records to a MS Word format commenced in an attempt to make the data more organised and regular, and generally more readily accessible. After an initial input period the original numerical code was changed to an alpha-numerical coding.

In the spring of 2005 photographic recording was started for suitable species. Images were attached to the printed version of records. Eventually the Friends recognised that the rate of increase in recorded information demanded a more sophisticated means of storage and report ability. MS Access was adopted as the long term data-base software. This database structure is still under development and the transfer of information is in hand.

In the period 2004/05 identity names were agreed for all copse and meadow areas. These names were initially utilised for recording species location. After some experience using these identities, in August 2005 the site was subdivided into five zones to simplify the recording of locations. Each zone is not a specific habitat, but four of the five have some feature not represented elsewhere on the site. The fifth zone (Central) has the least variety of habitats, consisting mostly of new meadows and two newly planted copses, one with a new hawthorn hedge boundary. 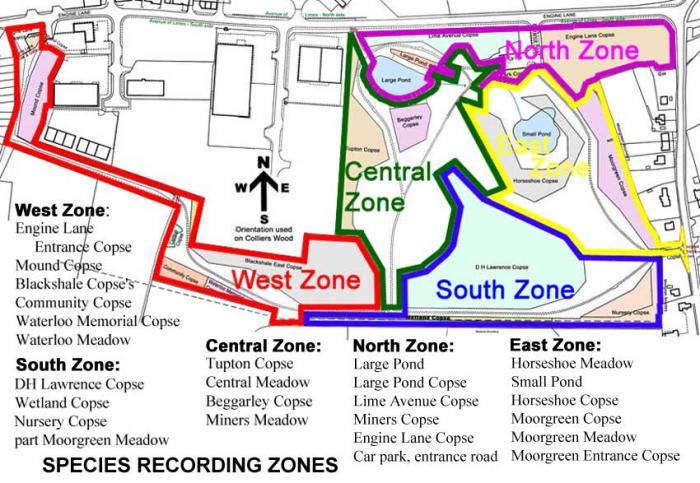 Initially the introduced species of shrubs and trees were confirmed along with the limited mature examples along some site perimeters. This was followed by identifying the minimal number of wildflowers, rushes and reeds- introduced in seed, plug and clump form- that had successfully established. Thereafter inward migration species of wildflower and some grasses were the main concentration. More recently fungi and mammals have been added to the observations with the occasional insect being included. Birds, waterfowl, butterflies, moths, dragonflies and damselflies have been recorded from commencement and their variety has increased in parallel with suitable habitats developing.

Future work will include the expansion in genera recorded and more detailed observations at specific habitats. The poorly drained acidic salty clays and shale that constitute the backfill material from the open-cast operation significantly affect the establishment of plant/tree species and along with the uneven settlement of the surface profile, promise the development of several small habitats included in the Nottinghamshire BAP Habitats of Conservation Concern list.

If you have specialist knowledge of any species, we would welcome your help.