Broxtowe’s decision to apply for a Green Flag award in 2008 drew attention to the lack of care taken with the sites habitats. The Management Plan prepared for the Green Flag application included environmental improvement works. This need was later reinforced by the judges’ comments when the site gained Green Flag status. Inspired by the Green Flag achievement, a determination to review the effects of the prevailing maintenance program and modify to aid habitat development, quickly emerged. As a trial, the regular grass cutting of the Moorgreen Meadow ceased in July 2008 and the result was appreciated as a more natural appearance quickly emerged.

Major efforts were made in 2008 to determine policies for the copses, hedgerows and meadows. Some habitat work commenced in late 2008 and, during 2009, work on all agreed proposals began to be implemented. Those proposals and progress are detailed below.
Further studies to determine policies for ditches, water bodies and the small amount of mature areas are still to be undertaken.
Habitats for dedicated cornfield wildflower areas were tested between 2009 and 2011. Conclusions were incorporated into a revised meadow policy in November 2011.

General requirements for wooded areas were identified as- 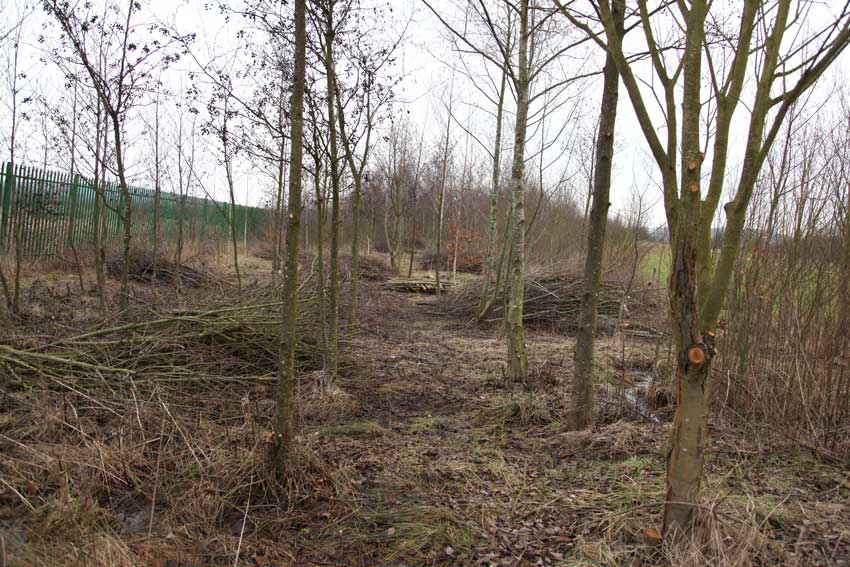 As pioneer species were the most successfully established, a general statement for thinning guidance was agreed- ‘where there is goat willow and/or alder invading the space of any other species, they are to be removed.’

The team recognised that there would be an impact on the species using these trees as food sources. As an example, siskin where abundant autumn visitors and their numbers decreased as alder, their main food source on site, was progressively removed.

Trees with a good visual appearance/colour and high value as a food source are encouraged in areas adjacent to the most heavily used tracks. Infill planting along these routes concentrates on those species, e.g. rowan, field maple, crab apple, holly, blackthorn, silver birch, downy birch and aspen.

In the larger expanses of copse, small glades have been formed. Planted shrubs of dog rose, Guelder rose and hazel are being supplemented by other self-set species. These form the basis of the under-storey development. Supplementary planting will be considered at a later stage for patches that are slow to regenerate.

A schedule of thinning work was agreed and set to a program that ran from 2008 to 2012. A majority of the thinning work was completed by the end of the 2013/14 winter period. Work still outstanding consists of

Implementation of the 2017 Copse Management Plan recommendations will impact on the work scheduled for some copse perimeters.

The D H Lawrence Copse was not included in the original schedule of thinning works as more investigative survey work was required for that copse. Following on from transect surveys undertaken by Castle College Nottingham students, an initial concept was agreed in November 2011. This was refined into a two stage action plan. The first stage was to identify key specimens of three‘structural’species- Sessile Oak, European Larch and Scotts Pine. In October 2013 pre-marking for halo pruning began. This enabled an overview of likely effect prior to pruning work commencing in the 2014/15 dormant period. Completion is anticipated in the 2017/18 winter period. The second part of the task will be the general thinning of the remaining trees. Aim is to achieve a balance of species and ensure that the food supply remains buoyant.

The Wetland Copse is an evolving naturally forming wet woodland situation that is affected by run-off from adjacent agricultural land. A management plan is being evolved with the help of Western Power, Notts. Wildlife Trust and Greenwood. A major aim is the remove the danger from trees that were planted in the original landscaping works interfering with the overhead power cables. Friends seek to attain a sustainable mix of trees and shrubs that are suitable for this habitat and minimises the maintenance work required. Some coppicing may be introduced and significant sized trees regrettably removed.

Following a recommendation from the Green Flag judge, (2011-12 period) two copse areas were classified as ‘non-intervention’. Their characters are very different. The long term impact is being monitored to establish if any benefit accrues. Areas are shown on the Copse Maintenance Status May 2017 drawing.

A desire to expand the hedgerow habitats led to consideration of replacing some of the rabbit fencing protecting the copse growth with new hedgerows. It was recognised that hedgerows could also be used to restrict access to specific areas and that in an appropriate location they would add to the overall visual appearance. Conversely, the Friends were adamant that Colliers Wood should not take on an urban park appearance with any regimented arrangement. Visitors’ opinions reinforced the desire to retain the character of natural open countryside as far as it was possible to do so.

A survey of the existing hedgerows was undertaken. This identified some mature hedges dating from the industrial use of the site and young hedges planted when the site was landscaped. The mature hedges had not been properly maintained for a considerable number of years and low level gapping and upper bowed heads was abundantly typical. The newer hedges had variable growth success and substantial gaps had formed through establishment failure and later flooding. Their value as habitats was low.

Additionally it was recognised that hedgerows to the domestic property boundaries along Moorgreen are in retreat. Most of the property owners have removed some or most of their hedges that were growing when Colliers Wood was formed. The Moorgreen grid of hedges constitutes a significant link in a broad wildlife corridor up to the adjacent magnesian limestone ridge area. 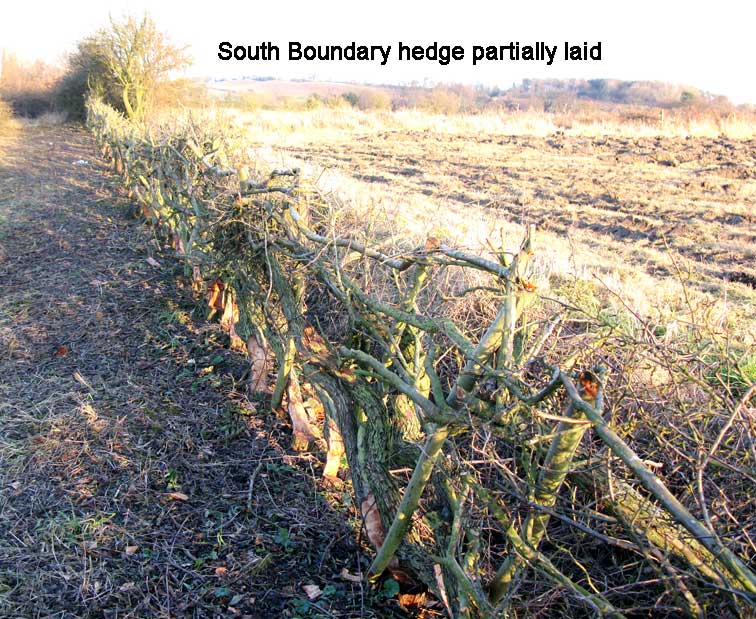 Site inspections led to agreement on locations for a limited amount of new hedgerows. The specific purpose for most of these is habitat protection by restricting access to copses or by deterring the formation of short cut routes through copses. Protection of waterfowl nesting locations was relevant for the hedgerows adjacent the Large Pond. Removal of 2m high chain link fencing was also a factor in the decision for the Blackshale West and Engine Lane Copse hedges.
Installation of these agreed new hedgerows commenced in November 2009 and was completed by December 2011.

Remedial work to young hedgerows planted during the site landscaping commenced in December 2011. Some re-planting proved to be successful. Unfortunately though, the majority of the original hedgerows along the industrial area site boundary continued to fail after remedial plantings because of sub-soil conditions consisting largely of compacted coal washing detritus.

Broxtowe added two new hedgerows to the east and west sides of the Central Meadow in the 2014/15 dormant period. No consultation occurred with the Friends of Colliers Wood who believe this to be an adverse step towards an urban park appearance.

New hedgerows are mixed species, primarily hawthorn. The frequency of the other included species is adjusted to suit location. Those used are blackthorn, spindle, field maple and holly with oak added when practical. Density of planting is high, in recognition of the ground conditions and sometimes difficult growing environment.

Laying of the mature hedgerow along the southern boundary was accepted as an urgent requirement. (See image above) This work commenced during the 2008-09 winter and was substantially complete by the end of the 2010-11 winter period. The final lengths were completed in March 2012. Sections of this laid hedge subsequently failed.  Infill planting to this and the Waterloo Meadow hedgerow is still required.

The original mature hedgerow along the B600 boundary was successfully laid in December 2012. This exposed a view of the Engine Lane Copse trees and radically improved the appearance of this boundary- see above image. In February 2013 another hedgerow was planted behind and parallel to this laid hedge in preparation for a future need to remove the existing alignment to prevent constriction of the narrow pavement. A hawthorn thicket was laid behind the adjacent bridge parapet to ensure continuity of security along this boundary. 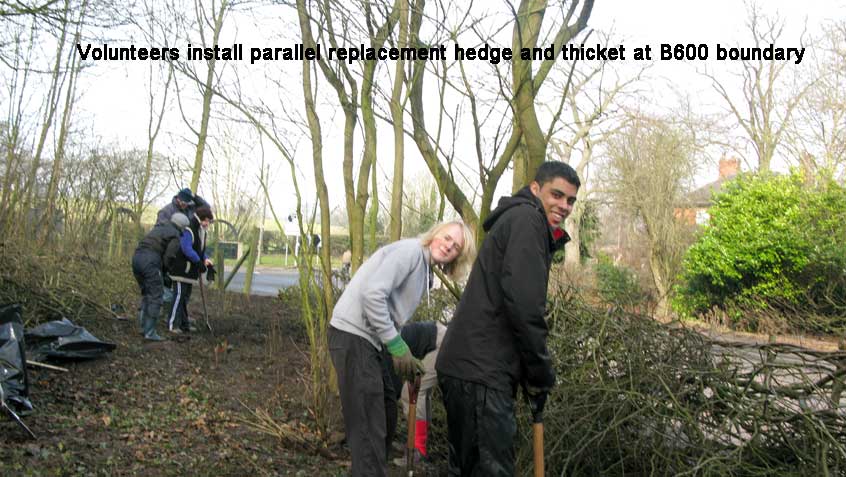 The last of the significant original mature hedges, along the west face of the Mound Copse, was successfully laid in March 2015. Both of these later laid hedgerows are in the Nottingham style.

The Greenwood Community Forest assisted with new and remedial hedge work through two grants for the purchase of the mixed species whips.

Record of hedgerow works as at April 2015

Formulating a revised grass cutting regime involved more conflicts in requirements than the previously considered habitats. The site is popular with dog walkers, most of who act responsibly. The Friends did not think it prudent to make it more difficult for the visitors to remove dog faeces. We were also conscious of the possible health impact on those susceptible to pollen. However, there was a desire to substantially elevate the grassland habitat to extend the food chain and regain ground nesting birds. The site was occasionally visited by buzzards and kestrels had nested in a copse. Skylarks regularly visit to feed, but haven’t nested on the site since 2002. 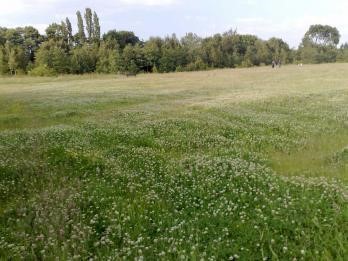 Practical considerations related to site events additionally limit opportunity. However, the Moorgreen Meadow trial in the late summer of 2008 quickly demonstrated the potential visual advantage of reduced mowing wherever it was possible.

Each grassed area was reviewed using the following list of factors affecting the height of cut and the cut frequency/time:

The Friends conclusions were illustrated on the agreed plan ‘Colliers Wood Grass Maintenance Scheme’ that was refined with Broxtowe’s staff. This became the basis for monitoring the success, or otherwise, of the agreed parameters. Several modifications were introduced as a result of the ongoing monitoring experience. These included trial periods for some specifications. Eventually, in November 2011 a unified revision scheme was agreed. This incorporated the results of trials and the changes to the grass maintenance equipment employed. It also recognised the increased use of the Moorgreen Meadow for major events, absorbed the last of the original dedicated wildflower areas, introduced some ‘no-cut’ trial areas and a twice annual cut trial, and established a dedicated area for cornfield annuals. This layout document, ‘Colliers Wood Grass Maintenance Scheme – Rev 2’ is listed below for viewing/downloading along with the original plan.

A second plan ‘Colliers Wood- Proposed changes to alignment of path between Beggarley and Moorgreen Tracks’ addressed the erosion along the line of the mown path. This was tweaked in December 2011.

Wide margin areas along the tracks are cut to facilitate dog walkers’ requirements. In long grass areas bare patches are left to naturally regenerate a sward and clumps of inward migrating species of grass are encouraged/protected by avoiding mowing. Attempts to attain an appropriate mix of grass finishes suitable for the various uses of site areas will continue. The illustration below shows the dominance of red fescue in the Central Meadow during the first ‘annual cut only’ year. Subsequently, dominance has cycled through other plant species.