This was our first major project and was begun when the trees planted in the copses were of little value as habitats. Our long term intent was to provide a natural environmental corridor between the adjacent rural landscape and the urban fringe. By this means we hope to help species re-colonise the back gardens and patches of undeveloped land within urban areas of Newthorpe and Eastwood. 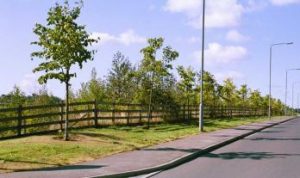 It was in 1999 that Marion Layton, a founder member and the first FoCW treasurer, won a financial award from the Natural Pioneer Millennium Award 1999/2000. Marion decided to donate the money to start this green corridor project along the Engine Lane site boundary. The Greenwood Community Forest Partnership offered a grant to raise the sum available and Broxtowe Borough Council agreed match funding. This enabled the Friends to create the first phase of the Avenue of Limes stretching from the B600 junction to the commencement of the industrial units. This first planting consisted of 38 tilia tomentosa.

The Friends wanted to extend the project further and sought support from the companies within the adjacent industrial units and those involved in their development. Generous financial contributions were offered and the Greenwood Community Forest Partnership helped finance the work through the Community Conservation Grant 2000/2001 scheme. With further contributions from Broxtowe, the second phase of the avenue completed the plantings on the ‘south’ side of Engine Lane, past the industrial site and on to link with the Engine Lane entrance at the west end of Colliers Wood. A section along the ‘north’ side of the road was also planted raising the total number in the avenue to 102, (after one was stolen). 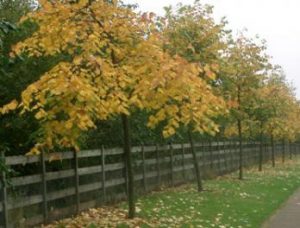 The remainder of the north side of Engine Lane (opposite the site) is part of the Greasley Estate. Negotiations with the Estate since the completion of the first phase have not yet resulted in agreement to use their field margins for the lime plantings. Currently the Estate is disposing of its assets and does not respond to any approach.

The avenue will eventually form a visually pleasing ‘entrance’ route to Eastwood. Broxtowe Borough Council has subsequently added to this effect by creating a ‘gateway’ feature consisting of two half winding wheels at the B600 end of Engine Lane.

The avenue is already beginning to take on an established appearance with nominal canopies forming, just sufficient for the first nesting to take place. Together with the gateway feature, Engine Lane has become a more imposing approach to Newthorpe and Eastwood. 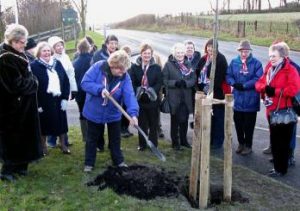 In January 2009 the Beauvale Trefoil Guild celebrated their 25th anniversary by adding a silver lime tree to the Avenue of Limes. A contribution to the community that will add pleasure for several generations. Councillors Sue Wildey and June Layton were pleased to help with the planting.

The guild received a grant towards the cost from Greenwood Community Tree Planting Grant 2008/09 scheme.